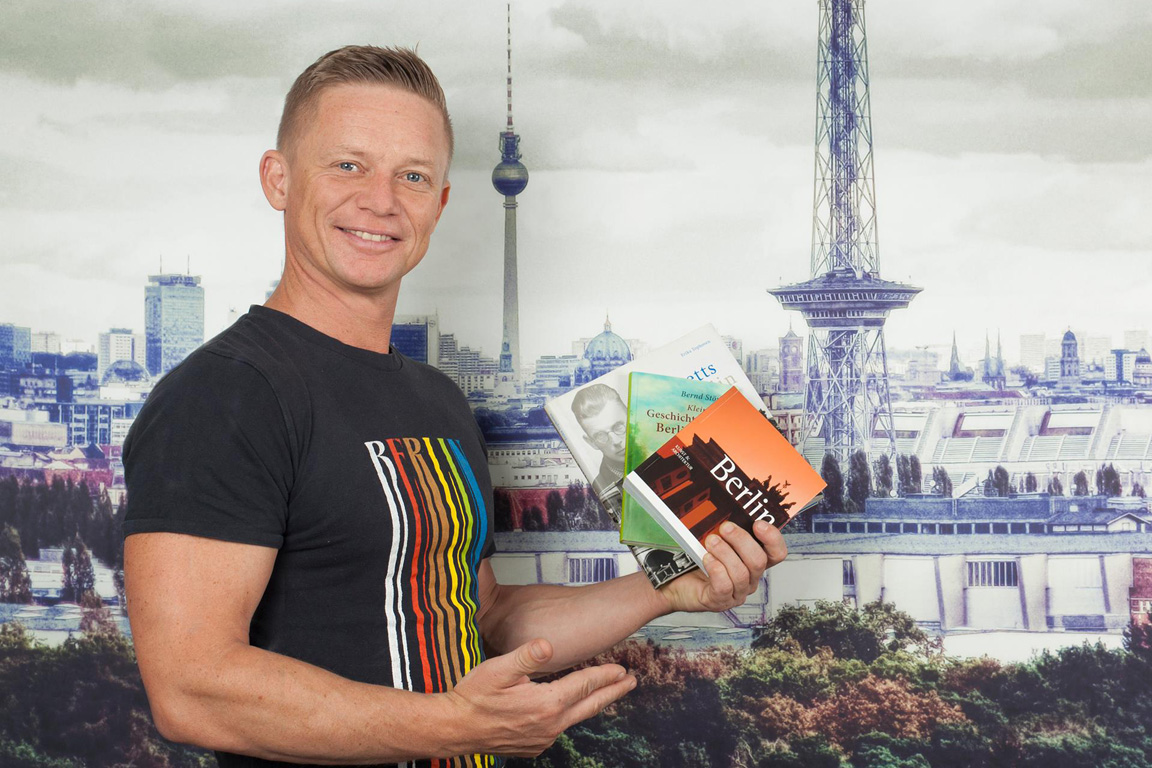 Markus Wiehler is a normal citizen of Berlin. Normal? …A miniature portrait of a turbulent biography between east and west Berlin.

…from childhood to present…
After so many years, Berlin’s history between Potsdamer Platz and Brandenburger Tor has virtually disappeared. Office blocks and hotels – higher than the original historic landmarks –
Steel and glass structures pay tribute to our present time. But where are the authentic witnesses of history?
They are still among us, the people who can tell stories of past experience. There is little that is more gripping than getting to know of real life from a divided city.

…perhaps the only ‘Ossi’ that ‘jumped the border’ twice!

Markus Wiehler is a witness to history. Born in 1968, he spent a normal GDR childhood with FDJ (free German youth) adventures and “Club Cola” – although without a mind for politics, until politics entered his life and turned everything upside down. In 1988 as an acrobatics pupil he took advantage of an engagement in Paris and fled. After staying in West-Berlin for 1 year he risked a return to East-Berlin. From there to Bavaria – a second try to find a footing in West-Germany. Eventually his love to Berlin brought him back to his home city.

…before the “Tränenpalast” became a tourist attraction…

On the way to the circus festival ‘Cirque de Domain’ he passed the border checkpoint between east and west Berlin. The strict departure proceedings and the family drama connected therewith demonstrated to the 19 year old what gave the checkpoint its name (palace of tears).

…how an “Ossi” learned to be a “Wessi”!… or the toughness of the ‘Ease of existence’…

Not only at that time it was a difficult step for a young acrobat to be thrown from a regimented System into one of so-called freedom.

Markus Wiehler has become independent. In the heart of Berlin’s centre he lives in an old house, at last, on his old home turf in the east – which now happens to be west. In the direct neighbourhood he is witness to the fury of rebuilding and renovation and to the fights with the
‘Tacheles’ initiative. Clubs come and go – he knows them all. The old corner pub, the ‘Gambrinus’ had a feeling of home and nostalgic comfort for him and the old inhabitants of the neighbourhood…

He still knows the hidden corners and the forgotten secrets of many backyards. He is at home in the world of Berlin’s artists and actors, knows the back stage world. Even today he still travels with his long time artist friend with the group ‘Lametta’ – although now world wide without borders…

Further impressions in the picture gallery – or during my tours. I look forward to your call.